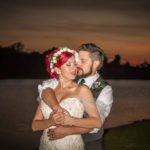 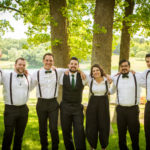 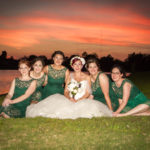 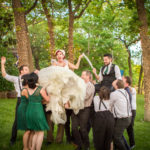 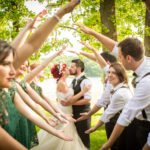 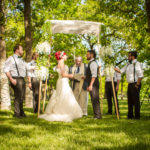 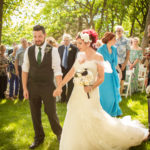 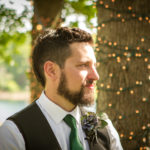 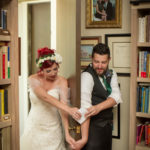 Pamela & Josh has such a wonderful love story. With their love of theater, family and friends, they incorporated these elements into their wedding theme of “The Beauty and the Baylor”. They created a very modern take on the Beauty and the Beast fairy tale. Their “playbill” program featured the couple as the stars of the show and wedding party as the cast with Act I the ceremony, Act II the receptions. Each grooms and father’s boutonniere was fashioned after their favorite comic book and bridesmaid and brides bouquet was made from pages of story books.  The groom’s court also had the groom’s sister as Best Women along with his Best Man.  The wedding party had their own introduction theme music as they acted out a mini theatrical moment.  A single Red Rose under a glass dome played a big part as centerpiece on the couple’s sweetheart table.  Stacks of story books with custom book mark message from the couple and surrounded by white silk roses made a perfect guests table centerpiece. The Huppah was made by the groom and decorated by the bride.  The groom’s uncle officiated a touching ceremony were the couple’s recited their own vows and both birth mothers read a touching poem to the couple.  The reception was capped off with a rousing Jewish Chair Dance with the couple and their parents. Pamela big must-have was lots of twinkle lights.  We wrapped many of the big trees on the property with twinkle lights, which made for a magical look on the groom’s father lake property when the sun set.  This was such a fun wedding and an amazing couple to work with.  Pamela is as beautifully fiery as her red hair and so much fun!! We wish Pamela and Josh nothing but the best as they start the next chapter of their love story as Mr. & Mrs. Henry.  Special thanks to @AndreaHowardCakes, @CWPhotographyOKC, @RollingProductionsvideo, @PrestigeValetandParking , @CelebrationsProductionsDJServices, @Kristin HooperHairStylist, @krystalroseartistry, @BigTruckTacosCatering